Currently there is debate about how Australia could better respond to illegal drugs and the associated harm. One frequently raised option is "decriminalisation of drug use and possession".

2. There is strong public support in Australia for decriminalisation approaches.

3. The research evidence indicates that decriminalisation of drug use:

4. Many countries around the world have decriminalised drug use and possession in various ways.

6. There is an opportunity to expand decriminalisation for drug use in Australia, particularly through de jure decriminalisation schemes targeting all illicit drugs. This may further reduce costs to the criminal justice system and to individuals.

Decriminalisation is the removal of criminal penalties for specific offences. When we talk about decriminalisation, we are talking about the offence of drug use or drug possession for personal use, not supply offences (such as manufacture, wholesale supply or trafficking)1. That is, we are talking about removal of criminal penalties for drug use/possession.

Decriminalisation removes criminal penalties for use or possession of drugs for personal use. It does not mean legalisation.

Decriminalisation of drug use/possession is not the same as legalisation. Under decriminalisation, there is no legal means to obtain drugs for personal use (if a person carrying drugs for their own use is apprehended by police, the drugs will be confiscated). The key feature of decriminalisation is that drug use does not carry a criminal record at least in the first instance (much like many road traffic offences such as speeding) and this can have significant benefits for society and people who use drugs. Along a spectrum, decriminalisation sits between full prohibition (criminal penalties for all drug use that are applied in practice) and legalisation (drug use is legal).

There can be a variety of ways for decriminalisation to occur.2 The biggest distinction is whether the reform is de jure or de facto. In a de jure reform criminal penalties for use/possession are removed in the law (with optional use of non-criminal sanctions). In a de facto reform criminal penalties remain in the law, but can be lessened in practice (eg via police guidelines to not enforce the law).

De jure decriminalisation can occur through:

De facto decriminalisation can occur through:

What do the Australian public think?

Australians support a range of non-criminal actions (that is, actions which equate with the decriminalisation of use/possession of illicit drugs). When asked: "What single action best describes what you think should happen to anyone found in possession of small quantities of cannabis/ecstasy/heroin/methamphetamine?" those surveyed in the 2013 National Drug Strategy Household Survey (N= 23,855) could select from a range of responses. The table below shows the results for each drug. As can be seen there is significant support for decriminalisation responses across all four drugs.

Table 1: Support for actions taken against people found in possession of selected illicit drugs for personal use

What does the research evidence tell us about the effects of decriminalisation?

A number of international and Australian studies have considered the effects of decriminalisation (for a full list of studies, see the DPMP annotated bibliography). Most studies have focussed on cannabis decriminalisation, but they cover different types of models e.g. de jure vs de facto reforms.

Is there any research showing negative effects of decriminalisation? Yes, one negative consequence of decriminalisation that has been reported in research is 'net widening'.3 Net-widening occurs when more people are sanctioned after than before reform, due to the greater ease with which police can process minor drug offences. The extent of this depends on the specific choice of policy design and how the reform is implemented (eg whether the consequences for non-compliance are more severe than the original offence; the extent of police discretion). This means that the way in which decriminalisation is implemented is very important. Research has shown that decriminalisation does not lead to increases in crime (through perceptions of weaker laws). Indeed, people who do not receive a criminal record are much less likely to engage in future crime or have subsequent contact with the criminal justice system, even when you take into account their previous offending history. There is also no evidence that decriminalisation will lead to other types of crime, such as supply or drug-related crime.4

Does decriminalisation lead to increased drug use? No.

As noted above much of the research has focussed solely on cannabis decriminalisation. Even so, the same effects have been achieved across all drugs (eg heroin, cocaine) in Portugal which decriminalised the use and possession of all illicit drugs in 2001 alongside a more comprehensive approach that expanded investment in drug treatment, harm reduction and social reintegration. Portugal demonstrated reductions in the burden on the criminal justice system, reductions in problematic drug use, reductions in drug-related HIV and AIDS, reductions in drug-related deaths, and lower social costs of responding to drugs.8

Does the model matter? Yes, de facto reforms tend to rely on the application of police/judicial discretion. This creates higher risk of inequity in terms of who avoids criminal sanctions: such as exclusion of disadvantaged and minority groups or geographic differences in policing. There is much less risk of inequity in de jure reforms, although any reform (whether de jure or de facto) that uses criteria to target particular groups of people or drug types risks inequitable outcomes.

Which countries have decriminalised drug use/possession?

Others are imminent (for example, in November 2015 the Irish Drugs Minister announced their intention to decriminalise possession of all illicit drugs).

What currently occurs in Australia?

Does that mean that everyone detected by police is charged, convicted and sent to prison? No.

One key reason is that Australia has a number of forms of decriminalisation for drug use and possession in place. The system is complex: and the devil really is in the detail. But, we summarise here the response for adults specifically.

Table 2: Type of decriminalisation provided in Australia by police for people aged 18 and over, by type (de jure vs de facto), drug, and state/territory (as of 2016)

There are two final points to note about the Australian approach. First, access to all de facto decriminalisation schemes in Australia is controlled by "eligibility requirements." For example, to be eligible people often have to admit the offence, not have been detected by police more than once or twice, and carry only a particular quantity of drug (e.g. 2 grams or less). Anyone who does not meet the strict requirements is processed through the usual court mechanism. Such eligibility requirements can exclude those most marginalised and/or those most in need of diversion into treatment and rehabilitation.11 De jure schemes have fewer eligibility restrictions (see Table A1) which increases program access and equity.

Second, despite population drug use rates remaining stable in Australia, the rates of drug use/possession detections are continuing to rise.12 This means more people who use drugs risk getting charged, convicted and imprisoned for minor quantities of drugs.

There are a number of ways in which Australia could improve its policies:

The DPMP have developed a bibliography of the main research reports and analyses of drug law reform options, DPMP annotated bibliography. 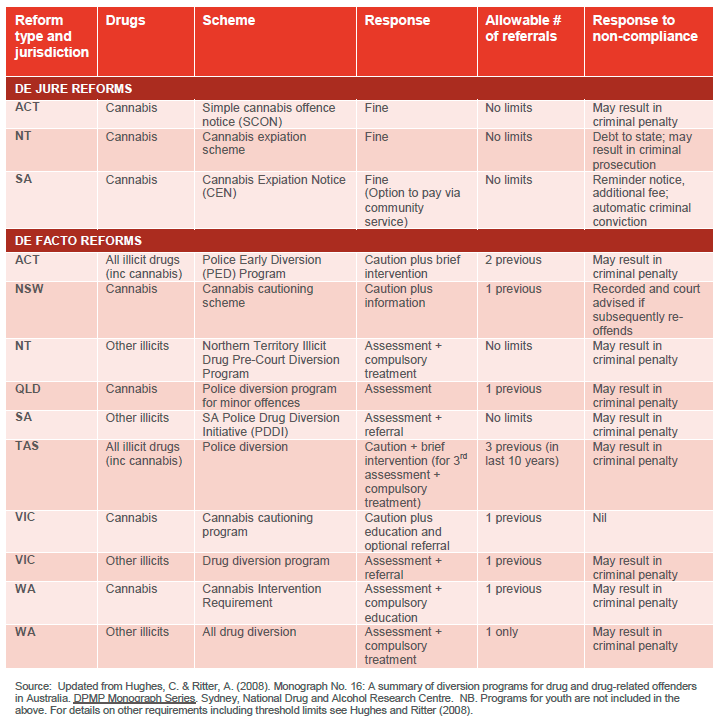 This briefing note was prepared in February 2016 and was accurate to the best of our knowledge at that time.