In 1998, a special session of the United Nations General Assembly agreed to set a 10-year deadline to make the world "drug free". After an embarrassing failure to achieve this goal, the deadline was extended a further 10 years, setting the world up for another inevitable failure in 2019.

In the intervening years, the use, availability and variety of illicit drugs have escalated exponentially. It is estimated by the UK charity Transform Foundation that 300 million people worldwide used illegal drugs in 2012, contributing to a global market with a turnover of $US330 billion a year.

The vision of a drug-free world has faded. We are instead presented with a nightmare scenario, where a multi-billion dollar black market funds  organised crime and terrorist organisations.

In pursuing a drug-free world, national governments have unwittingly been responsible for; 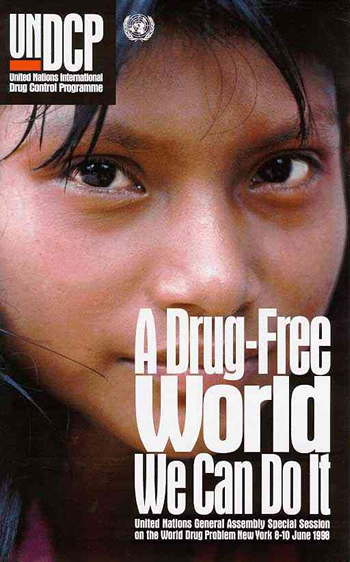 Apart from the human suffering caused by prohibition, the economic cost beggars belief. Estimates by Transform put the total expenditure on enforcing global prohibition at more than $US100 billion a year.

By 2014, some United Nations member states, including Mexico and Colombia, considered the unintended consequences of the UN Drug Control Conventions so catastrophic that they called on the UN to hold a special session dedicated to the world's drug problem.

UNGASS 2016 is an opportunity to reassess the utility and usefulness of the three UN Drug Control Conventions that provide the legal and moral foundation for global drug prohibition.

Although it cannot alter the conventions the discussions will have an immediate flow on effect to changes in drug policy being contemplated in Australia and around the world.

Currently the Drug Control Conventions simply ignore alcohol and tobacco, the two most widely used and deadly drugs, but require member states to control the possession of an ever-growing schedule of drugs and precursors regardless of their relative harmfulness. The only exception is for medical or scientific purposes.

The 50-year-old conventions are out of step with the modern world. For example, the UN conventions classify cannabis as a narcotic of extremely limited therapeutic value, listing it on the most restricted Schedule IV alongside heroin.

This is at odds with the latest scientific evidence that acknowledges cannabis’ enormous medical potential and the reality that it has been prescribed for many years in the US and other jurisdictions.

However, moves to thwart progress at the 2016 Special Session started at preliminary debates in April 2015, where the US sent a delegate to argue that policy reforms should fit “within the framework of the three United Nations drug control conventions”.

In other words, the US position is that there should be no change to the three drug conventions which is a prerequisite for any substantive reform.

Australia’s position echoes that of the US agreeing that there should be no change in the existing drug control conventions and arguing that although demand and harm reduction should be adopted, these approaches should be combined with strong law enforcement.

More recently on March 23, the 59th Session of the Commission on Narcotic Drugs met in Vienna and agreed to a draft outcome document which will form the basis of the UNGASS 2016 agenda and debate.

This outcome document fails to distinguish between drug use and drug abuse, excludes alcohol and affirms the delusionary call in the 2009 Political Declaration on the World Drug Problem to “eventually eliminate the availability and use of illicit drugs and psychotropic substances in order to ensure the health and welfare of humankind”.

Even more disappointing is that the Vienna draft outcome document focuses on demand and supply reduction but fails to mention “harm reduction” as a viable means to address the health consequences of drug use.

This is in contrast to many member states and NGOs who are calling for substantive reform.

Compared to 1961, when the first of the UN conventions was ratified, the world is now a different place. Alternatives to prohibition drug policies exist in Portugal which has decriminalised all drugs without the dire consequences predicted.

America, the home of prohibition, has fully legalised cannabis in four states, as has a sovereign country Uruguay. Canada and other countries have stated their intention to do so later this year.

It is agreed, even among the most zealous, that a “drug free world” is an impossible dream.

Neither governments nor the UN, nor even loving parents can stop young people using drugs. All we can do as a society, as parents, is make it as safe as possible when they do use drugs.

If traditional interests hold sway at UNGASS 2016 and this grand assembly of good men and women reaffirm the status quo as seems likely, an opportunity will have been lost to resolve one of the great health and human rights issues of our time.

By Greg Chipp, Director of Drug Policy Australia an Australian NGO dedicated the prevention and control of diseases associated with the use of drugs, by a harm minimisation approach, through public education, research and advocacy.

Printed in the Sydney Morning Herald and The Age newspapers.

UNGASS 2016 has finished without any meaningful reform being agreed to.

The entire process was a sham, full of hot air that will infuriate the many countries, world leaders and NGO's calling for a re-evaluation of the UN mandated the war on drug consumers.

As predicted there was little meaningful discussion on reform because the draft outcome document, previously decided in Vienna by the Commission on Narcotic Drugs, was approved on the first day. The entire process was disappointing for the countries that called for the Special Session to discuss the world's drug problem.

The only positive from the hollow agreement reached at UNGASS is that it will motivate those countries around the world that are unhappy with the UN's prohibitionist policies to challenge the 3 drug conventions.

Countries may either withdraw from the conventions or simply work around them as America is doing with its "scientific experiment" in legalising Cannabis.

What is the next step in drug policy reform, now that the UN has refused to heed calls for reform?