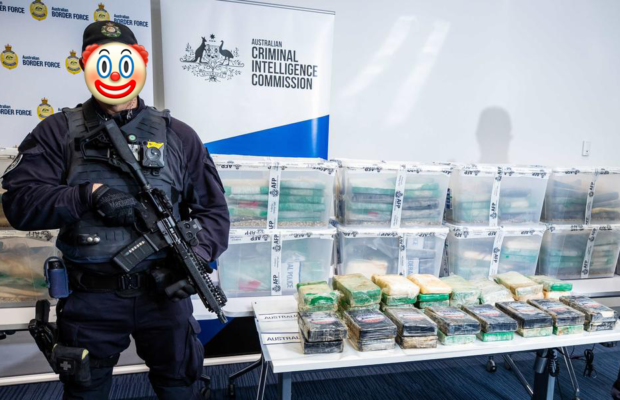 The seizure of 416kg of cocaine off the Yorke Peninsula dominated mainstream media headlines last week. Journalists around the country brainlessly regurgitated the glowing press release spoon-fed to them by the Australian Federal Police’s public relations department.

Reporting diligently lauded the 21st of March operation as the largest illicit drug seizure in the history of South Australia, aggrandising the bust as an apparently monumental win against crime. Yet such coverage only obscures the reality of drug policing in Australia.

Greg Chipp, CEO of NGO Drug Policy Australia, believes such seizures have little to no effect on the Australian drug market.

“By the Australian Crime Commission’s own admission, the illicit drug market in this country is worth $10 billion. Seizures have minimal impact on what is a buoyant and resilient market,” he said.

“If anything, seizures lead to increasing drug prices and profitability, which incentivises the market to fill the gap. It’s a self-defeating process, like a cat chasing its tail.”

The amount seized is purportedly worth $166 million on the street – a mere drop in the ocean in the context of Australia’s gargantuan market. Rather, seizures of this kind are used as publicity tools to bolster the image of the police force, justifying their very existence and going a long way to maintaining high government funding.

“Modern policing has its own well-funded and trained public relations department which tries to blow its successes out of proportion,” said Chipp.

The AFP, for this seizure, supplied three videos of the cocaine in question and extended footage of the dockside arrest. There was also an orchestrated photoshoot depicting two of our boys in blue alongside stacks of the confiscated cocaine, both of whom were holding assault rifles at the ready in a room of crowded journalists.

Such media-complicit publicity contributes to the widespread misconception that drug enforcement is actually effective, when in reality these operations have minimal impact on drug crime.

Indeed, an Australia Institute of Criminology (AIC) international review of the impact of drug seizures could not find an evidentiary link between seizures and a decrease in drug crime or drug use. One cited NSW study found no association between increased supplier seizures and the number of arrests for cocaine, heroin or amphetamines.

While there is no measurable impact on drug crime, such operations come at significant cost to the taxpayer. A 2013 report by the National Drug and Research Centre revealed Australia spent over $1 billion on drug-targeted law enforcement in 2009-10 alone. This figure does not include the immeasurable economic cost of criminalising drug use. For example, illicit drug offenders constitute 14.7% of the prison population in Australia.

Aside from being costly, there is also evidence to suggest that drug seizures can in fact be harmful. Local drug seizures are associated with a decrease in purity of street drugs, potentially incentivising suppliers to cut their product with more harmful substances.

The aforementioned AIC report cited a 2005 study of street-level heroin purity, which measured a 10-20% decrease in drug purity after a major AFP heroin bust. While the strongest predictor of fatal heroin overdoses is long-term use rather than the presence of impurities, the potential impact of busts on the street-level purity for recreational drugs such as cocaine, ketamine and MDMA provides greater cause for concern, if such substances are diluted with more harmful replacements.

Drug seizures are mere symptoms of a global climate of regressive drug policy, the social harms of which are extensive and well-documented. It’s a problem that’s even recognised by the United Nations, with a Coordination Task Team report claiming punitive drug policy “undermine[s] the human rights and well-being of persons who use drugs, as well as of their families and communities”.

The obvious solution is a shift away from law enforcement and towards treating drug use as a social, not a criminal, issue. Chipp and Drug Policy Australia go one step further, advocating for the complete legal regulation of illicit drugs. Case studies like Portugal, where the decriminalisation of drug use has decreased overdoses, provide a handy roadmap for future policy. To get there, however, we need to confront the reality of drug enforcement in this country, to confront the performativity of publicised drug busts like the one off the Yorke Peninsula. For if public perception adequately shifts, our elected representatives may actually be receptive to instigating the policy changes required for social progress.

Reprinted with the kind permission of Fabian Robertson, editor at Honi Soit, a student run newsletter of the University of Sydney. The original article can be found here.