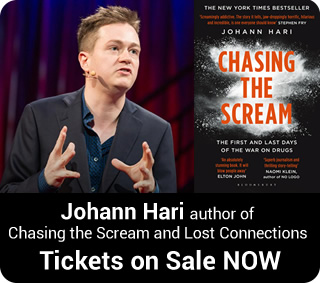 Depression and addiction are on the rise in Australia, fed by stigma and silence. Criminalising drug use and medicating depression has not fixed the problem.

New York Times best-selling author Johann Hari believes that there is a better way. Johann tells the hidden story of the war on drug users, and what really causes both depression and addiction.

His books show how stigma and prejudice have obscured some of the most significant human rights and social justice issues of our time.

Join Johann Hari for his only Melbourne appearance at Melbourne Town Hall to talk about Drugs, Depression, Stigma and Addiction.