According to the United Nations Office on Drugs and Crime, Australians are the world’s second highest per capita consumers of MDMA.

If MDMA consumption was an Olympic sport we would win silver. 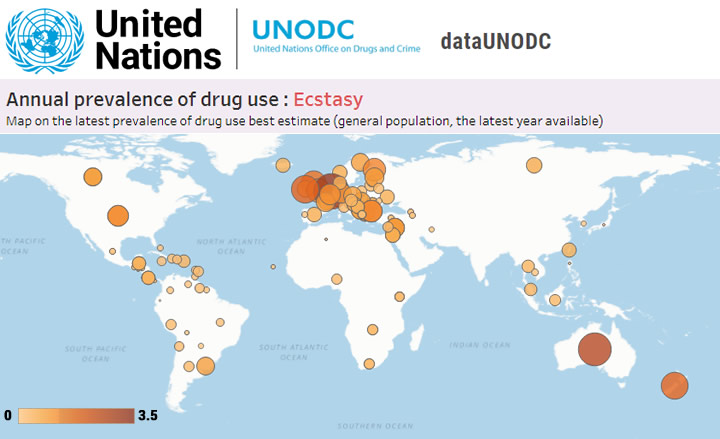 The Alcohol and Drug Foundation states that users of MDMA experience “euphoria; energy and confidence; higher heartrates; and excessive sweating”. Its popularity among partygoers stems from increased levels of empathy.

As with any substance, MDMA can have adverse effects. When taken in larger doses, users may experience more extreme effects such as anxiety and paranoia. The Beckley Foundation describes the most serious of these side effects as, “overheating and cardiac problems”. However, compared with other drugs, ecstasy is not particularly addictive or harmful when consumed in moderate doses.

No jurisdiction has legalised ecstasy, but some theoretical benefits can be gauged by examining jurisdictions that have decriminalised drugs in general. Decriminalisation is the removal of criminal penalties for personal drug use and possession.

Associate Professor Nicole Lee and Professor Alison Ritter from UNSW’s National Drug & Alcohol Research Centre argue that “several studies have shown that decriminalisation does not increase drug use among existing or new users. It reduces demand on, and the cost of, the criminal justice system.”

They cite the case of Portugal which decriminalised personal drug use in 2001 and has since seen reductions in incarceration rates, and drug-related deaths.

Given the approximately two decades’ worth of data that have been accumulated since Portugal decriminalised recreational drugs, it is worth discussing the additional benefits that would result from the legalisation of drugs.

Legalisation involves the additional step of supplying and regulating production of ecstasy. For example, supplying ecstasy tablets of a known strength through the established pharmacy retail networks. Legalisation would mean that safer drugs with less contaminants exist in the supply chain. Not only would this decrease the rates of overdose and death from the use of MDMA, but also reduce the stigma of drug use, encouraging users to access medical services.

Governments would benefit from curtailing organised crime activity within the supply chain and limiting the distribution of tainted batches of MDMA. Increased tax revenue could be put towards improving health services, education, and infrastructure.

If Australian governments legalised MDMA how would this work?

A regulatory framework would determine factors such as price, purity, and the availability of the drug. A pharmacy-style model where people acquire the drug with a doctor’s prescription under relevant health advice is an option.

Alex Wodak, a physician and former head of the Alcohol and Drug Foundation believes that such an option would be feasible with a proof-of-age system that would protect underage individuals from accessing MDMA. “There’s no age restriction for black-market ecstasy,” Wodak says.

Dosage would be tailored to body weight and other individual health characteristics, and tamper-proof packaging with clear dosage information would help avoid accidental overdose.

Another option involves licencing clubs and entertainment venues to sell MDMA to eligible patrons. Hired staff would be trained to recognise risk factors such as dehydration to minimise adverse reactions. At the point of sale, health and dosage information would be given to inform users of best practice.

Overall, as Wodak describes, “sufficient funds would need to be made available for the enforcement of regulation”, as well as the obvious political motivation to proceed with such policies, something which Australia is currently lacking.

Prohibition has never worked before

The current prohibition regime on recreational drugs has been an unmitigated failure. In 2015 Australia spent approximately $1.18 billion on drug law enforcement, and yet people's access to drugs remains unabated.

Given that 600,000 Australians use ecstasy every year, governments should take control and tax the space currently ceded to organised crime. By not intervening and controlling the market, governments are shirking their responsibility to protect the health of their citizens.

Prohibition has never worked. From the alcohol prohibition in America in the 1920’s to the current prohibition on recreational drugs, criminalising drug users does not stop demand nor supply. Prohibition creates opportunity for organised crime syndicates that inevitably increases the costs of enforcement and the health risks to consumers.

Between 2001 and 2018, 392 people died of MDMA toxicity, many of whom took MDMA in risky combinations with other drugs. It is in the best interests of state and federal governments to promote harm-reduction measures which could have saved their lives. The never-ending war on drug users has continued the unnecessary suffering of drug users who are stigmatised. Had they been able to access vital resources, their avoidable deaths could have been prevented.